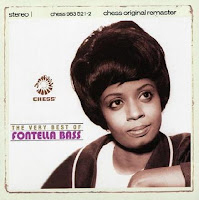 The 1965 classic ‘Rescue Me’ is widely regarded as the greatest record Aretha Franklin never made. The song in question was instead cut by Fontella Bass, who, like Franklin, was a singer who channeled the power and passion of her gospel roots to create some of the finest music of soul's golden age. This set is the most comprehensive anthology ever assembled of the great sides the St. Louis-born vocalist recorded for Checker/Chess Records in the mid-'60s. It includes the entirety of her 1966 The New Look album - largely consisting of contemporary covers -, as well as three duets with Bobby McClure - much in the mode of some of the more famous duets coming from Detroit or New York -, plus ten tracks from singles not previously included on album. There are indications that Checker were slightly caught out by the runaway success of ‘Rescue Me’ and weren't sure quite what to do with her, as some of these subsequent singles sound like blatant attempts to capitalize on her hit by sounding as much like it as possible. Some of her best material, conversely, was buried on B-sides, for example ‘The Soul of a Man’ and the duet with Bobby McClure ‘Don't Jump’, which became a big favourite despite being consigned to the other side of flop single ‘You're Gonna Miss Me’. This compilation also shows an evolution in music, as Bass sings in styles that include deep soul ala Atlantic, sweet soul ala Motown, uptown soul ala Wand and soaring soul ala Brunswick. I added ‘Don’t Jump’ as a bonus track, which was not originally included here. http://www.answers.com/, http://www.dustygroove.com/, http://www.amazon.com/

Fontella Bass' classic performance of 'Rescue Me' on Shindig (1965):